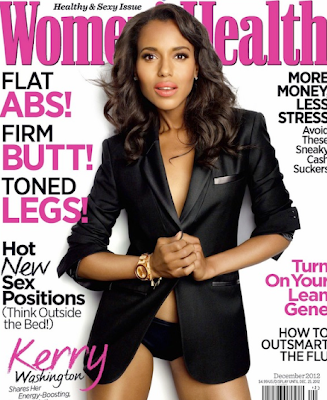 Some know her as Kerry Washington, whilst others know her as - Olivia Pope from 'Scandal' (one of the best characters on TV today!).
Kerry Washington covers the December issue of Women's Health magazine and as most would expect her to talk about Scandal, Washington actually spoke on her new film Django Unchained alongside actors - Jamie Foxx, Samuel L. Jackson, Christoph Waltz and Leonardo Di Caprio. 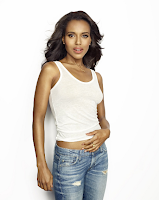 Showing off her slim figure, we see that Kerry Washington has an amazing body in the "health and sexy" issue of the magazine. In this magazine, Washington speaks on what she would be doing if she wasn't an actress, her preparation towards the release of Django Unchained and more.
(Please note that Ms Washington DOES NOT speak on her love life in Public). 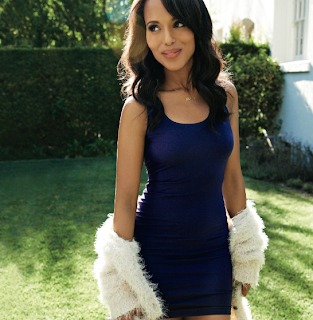 On prepping for Django Unchained:
“One of the things that I really love most about my job is the research part of it….So, I studied a lot. It’s kind of hard to articulate the level of preparation that we all had to do for this film because so much of it was emotional and psychological preparation. It’s hard to talk about because we all had to go into a part of American history that is so dark and complicated and fraught with the past sins of this country.”

On what she’d be doing if she wasn’t an actress:
“If I wasn’t an actress, I would probably be a teacher. Either an elementary school teacher or a yoga teacher. Both of which I did when I was living in New York pursuing a career in acting. I liked doing both of those things very much. I think it would surprise people to know that what I really wanted to do as a child was to be the woman in the Shamu show at Sea World. And the big joke in my family is that I started taking Marine Biology and I was like, forget the whale, I’ll just be on stage by myself.”

On her go to snacks:
“I am not a vegan, but I like vegan protein shakes. I mix them with coconut water instead of regular water. That’s my secret to having them taste better. I love popcorn. I could live on popcorn. The writers of Scandal have made my character Olivia Pope have a similar relationship with popcorn. But I don’t mind because I get to eat popcorn at work.”
Posted by Mobolaji
Email ThisBlogThis!Share to TwitterShare to FacebookShare to Pinterest
Labels: Beauty, Flicks, Health, Interview, Kerry Washington, Magazine Covers, Style