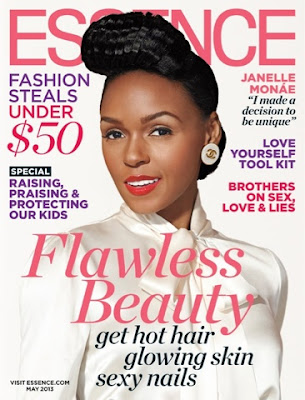 Recently winning a Grammy award this year with the group fun. Janelle Monae graces the cover of Essence magazine - looking absolutely flawless. Other than her amazing voice, and being signed to Diddy's record label 'Bad Boy' alongside French Montana, Cassie, Kalenna and MGK, Janelle Monae is known for wearing black and white uniformed/tailored suits.

In speaking with Essence magazine, the singer addressed a few things including wearing suits, beauty and new artists that have stepped onto the scene that she loves.

On her decision keeping her body concealed:
"People don't ask Jay-Z to take his shirt off when he rhymes," she says defiantly. Her refusal to let it all hang out is a major part of her attempt to "redefine what it means to be sexy and what it means to be a woman. Showing my skin is not what makes me sexy," she declares. "I like skirts and dresses just like everyone else, but I had a message I needed to put out there. It was up to me to show people and young girls there was another way."

On wearing suits:
"I enjoy the tuxedo and I enjoy suits. They are timeless and transcendent 18th century, 19th century, 20th century all the way to 2719. I think the tuxedo will outlive us.

On how she defines beauty:
"I love givers and when I find out someone is giving somebody else something from the heart... I think people who give their time are some of the most beautiful people that I know."

On new artists that she loves:
"I love Miguel, Frank Ocean, I'm just excited about new artist bringing forward their ideas and continuing on the legacies of some of the greats, the icons, that we were inspired by, that our music was inspired by. Just sharing their voice unfiltered being unafraid to embrace those things and make them unique, remain innovative. I love people who are into big ideas and whatnot. So I am really excited about some of the new artists.

Janelle Monae covers the May issue of 'Essence' and is currently available on newsstands.
Essence

MEANWHILE! Grammy-Award-Winning singer/songwriter Brandy sits down with PYNK Magazine for this cover story! Find out what they spoke about inside!>>>> 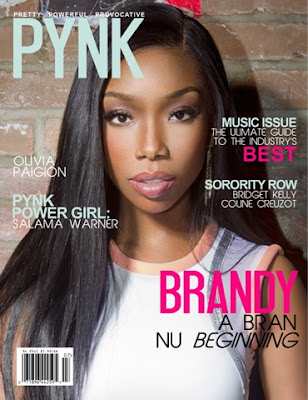 One of my favourite singers in the world - Brandy dropped her album late last year - and also got engaged to boyfriend - Ryan. Looking beautiful as ever, the 'Put It Down' singer spoke to PYNK magazine about so much including the current state of R&B music, her album 'Two Eleven,' playing her dream movie role - as the late Whitney Houston, balancing being an artist, actress, mother and soon-to-be wife. One of the many reasons why I love Brandy is because she's not afraid to say what she really feels - and she does exactly just that in this interview. Read below! 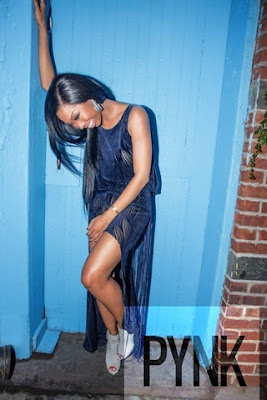 Do you feel like your growth and evolution as a woman influenced the creative process behind ‘Two-Eleven’?
“Yes, for me that’s the only way I can put the album together because I can’t put my all into a song if I haven’t experienced or watched someone else experience whatever it is I am singing about. With [‘Two-Eleven’], it was really about me reconnecting with my confidence and rediscovering who I am.”

You hit the ground running with the release of ‘Two-Eleven’. You were everywhere promoting the album. Do you feel as though your hard work paid off? Were you pleased with how the album performed?
“I feel like my hard work paid off because my fans love the album. Of course, I would’ve wanted the album to reach more people but I just feel blessed to be able to do what I love. Sales chart positions and all of those things don’t really define me…I define me.”

How do you feel about the current state of R&B? Are there any newcomers you listen to and would like to collaborate with?
“I’m not okay with the current state of R&B. That’s why ‘Two-Eleven’ was so important to me. I wanted to do an album that contributed to that genre of music. I think it was very necessary for the music industry and the hearts of people. As far as newcomers, I hadn’t really been paying attention because I was so focused on the album but I can’t help but pay attention to Kelly Rowland. I admire her so much and would love to collaborate with her. Beyoncé is phenomenal and Rihanna is amazing too.” 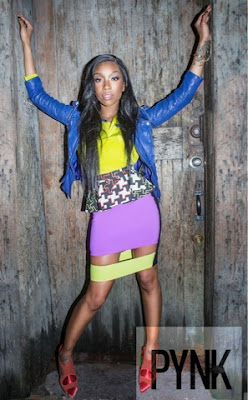 You’ve helped to musically influence an entire generation of singers and many of your fans feel that you have gone unrecognized for the impact you’ve had on R&B music. Do you agree? Why or why not?
“Sometimes I agree with it because I know there are a lot of talented people that have shown me a lot of love on top of my fans really expressing their love for me. Sometimes I think your ego gets in the way because you know you want everybody to feel that way about you. You want to get the credit. You want to get the props but I try not to live in that space because I know it’s ego. I’m just happy with being me. I’m happy with being able to be so connected in my being that I’m able to express that in my music. There are so many people who get the credit but they’re not really connected to their music. I would take the honesty and the connection with my music over the credit any day…but both would be nice! [laughs]”

You’re returning to “The Game” as Chardonnay for another season. What can viewers and fans of the show expect to see from your character this season?
“This season you’ll see Chardonnay find her place in this new football world. She’s transitioning into being Jason Pitts’ wife but still trying to balance maintaining her identity. You get to see her develop this friendship with Tasha Mack and also more of the dynamics of her relationship with Jason. What they have is true love. She’s not into him for his money.” 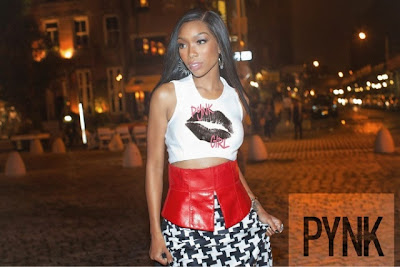 You and your family experienced great success doing reality TV. Would you ever do reality TV again?
“You know, I think I did reality TV at the wrong time. When I was on [Family Business] I wasn’t as consistent in my career. I wasn’t connected to my purpose at the time. After that, I said I wouldn’t do reality TV again but there are shows out there now like the ‘Mary/Mary’ show that are good. I would consider it if it were centered more on my career.”

What would be your dream [acting] role?
“Honestly, my dream role would be to play Whitney [Houston]. I studied her growing up, I knew her. I just feel that connection with her. I would love to be able to play her. I believe it could happen.” 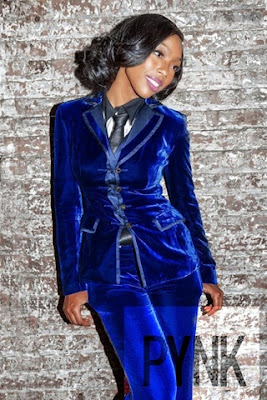 You recently became engaged. How did you and your fiancé meet and how did you know he was “the one”?
“He’s a music executive. So, we actually met in the studio a long time ago. We reconnected at a music event sometime later and when we talked, it just felt like I knew him. Then I would just run into him in random places in New York…I’d walk into a restaurant for lunch and he’d be there. I ended up running to him at another event and he kept staring at me the whole night. It made me so uncomfortable because I thought he was married. So, I told him that he should stop staring at me because he’s married and it’s not a good look. He was like ‘what are you talking about? I’m not married.’ [laughs] From there, we just started talking on the phone. Then, dating. When he told me he was relocating to LA for his job, I just thought to myself, ‘he’s going to be my husband’. I took that as a sign.” 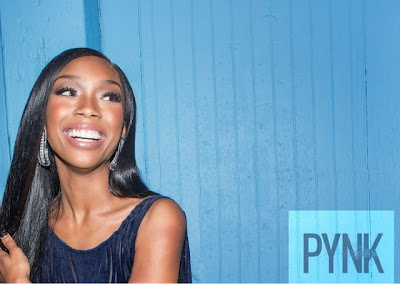 How do you balance your career, motherhood, and preparing to become a wife?
“I don’t know! [laughs] It’s hard. I haven’t worked this hard in my life! My daughter has her own life now. She’s getting older so she has her own schedule now. Sometimes, I want her to travel with me and she’s like ‘no mom. I have a school trip I have to go on.’ [laughs] I have a great support system though. My fiancé, my mom and god-sisters they definitely help out.”

You seem to be very close with your mother. How has that relationship grown or changed throughout your career?
“I think in the beginning it was about trying to figure out how to wear both hats. Being the client and the daughter and for my mother being the mom and the manager. But the foundation has always been love, protection, and wanting the best for me. It took a lot of self work but I can tell her anything and I know she always has my back.”

PYNK Girls love fashion! Tell our readers who some of your favorite designers are?
“Let me tell you…I have found my personal style! Bohemian Chic is totally my thing. So, when I’m not on stage that’s how I’m dressed. I love Free People…I’m addicted [to their clothing]. Free People…I need an endorsement or something. [laughs] Let’s get it in!”