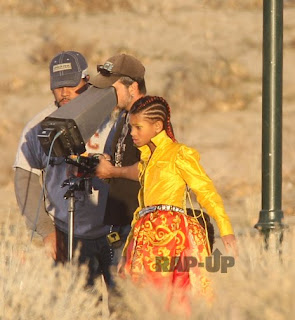 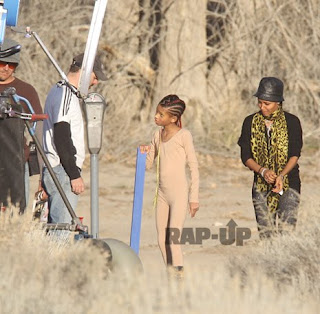 Willow Smith runs wild in the desert while shooting the music video for “21st Century Girl,” her follow-up single to “Whip My Hair,” which the pint-sized singer describes as a “dance record.” Over the weekend in Palmdale, Calif., the 10-year-old firecracker lit up the scene in a bright dandelion jacket and red skirt accented by a snaking yellow design, tied at the waist with a jewel-encrusted belt.

In a second look, she kept her hair in red-and-yellow braids while rocking a beige body suit, striking a pose alongside a parking meter as her proud mother Jada Pinkett Smith looked on.

“Hey people I am so excited for my next single!! Are you? It’s a dance record. I know you love to dance, don’t cha’……,” wrote Willow on her Facebook page.
Courtesy: rap-up.com
Posted by Mobolaji
Email ThisBlogThis!Share to TwitterShare to FacebookShare to Pinterest
Labels: Willow Smith