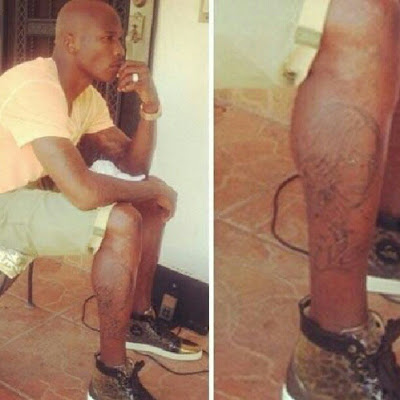 Now I don't know if this idea as stupid or smart Chad... But you are known for making stupid decisions... SOMETIMES!

After the incident of Chad Ochocinco Johnson headbutting wife, Evelyn Lozada - both Chad and Evelyn have been laying low. Especially Evelyn as her brother-in-law died.

Evelyn also decided to file for divorce, but Chad doesn't seem to care about that with this new tattoo and with these tweets!

I dont give a flying pretzel in skittle rainbow hell what she filed for... RT @cchx3reh: I thought she filed for divorce tho?
— Chad Johnson (@ochocinco) September 5, 2012


Chad has spoken!
Should Evelyn take Chad back? Or will she?
We just gotta wait and see...

(I think they will get back together! I hope I'm not wrong, that will break my heart if they don't...)
Posted by Mobolaji
Email ThisBlogThis!Share to TwitterShare to FacebookShare to Pinterest
Labels: Chad Ochocinco Johnson, Evelyn Lozada, Reality TV, Reality TV Stars