Festival season is in full limbo and Wireless Festival are the latest in revealing their much anticipated line-up.

The music festival held over a 3-day period at London's Finsbury Park had festival goers pumped after a fake line-up was released with Drake, Rihanna, Stormzy, Ariana Grande, The Weeknd, Nicki Minaj over the weekend. Wireless did confirm that the line-up was indeed fake and they'll be releasing the real line-up this week.

Well today at 9am, Wireless Festival took to their official social media accounts to announce the real line-up and confirmed acts fitted for the bill. Festival goers were less than impressed as they were disappointed about the “downgrade” from last years artists (Drake, Major Lazer, Avicii, Kendrick Lamar, Nicki Minaj, David Guetta) to this years one. Questioning why Geko, Lady Leshurr and Jess Glynne to name a few were set to perform?

Day one of the music festival Calvin Harris and The 1975 will co-headline the main stage, with Bryson Tiller and Miguel among other artists taking to the different stages to perform.

Grime is set to take over Sunday as Boy Better Know will close the third and final day on the main stage. Joining BBK on stage is Norwegian DJ and record producer Kygo, 19-year-old Dutch DJ and composer, Martin Garrix will also bless festival goers with his set. Other Grime/UK rap artists Newham Generals and Section Boyz will also perform.

Wireless will announce many more others that will perform at the 3-day festival presented by Live Nation. Check out the full line-up here >>>

Tickets for Wireless Festival go on sale this Friday, 11th March and will be available for purchase here. For more details about Wireless Festival, check out their official website: http://wirelessfestival.co.uk/ 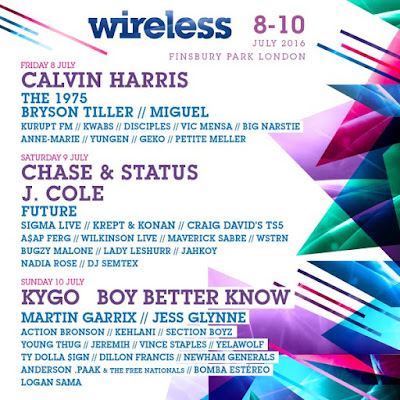