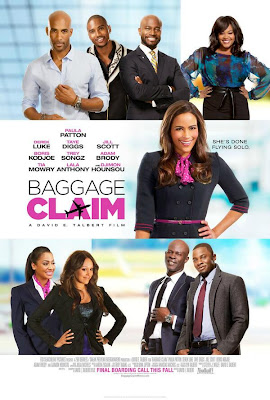 David E. Talbert is back at it again with this brand new rom-com "Baggage Claim". The movie is an all-star line-up with Paula Patton as the lead actress, as well as Jill Scott, Derek Luke, Boris Kodjoe, Djimon Honsou and a whole lot more.

"Baggage Claim" is based on a flight attendant Montana Moore (Paula Patton) who realizes that she is the only woman in her family to have never been married. Once finding out her younger sister (Lauren London) is getting married - Montana Moore is on the hunt to find a man within 30-days on a thirty-thousand-mile expedition.

Montana has the help of her best friend - who is played by singer-actress Jill Scott and all the men that Montana comes across - a P.Diddy wannabe played by Trey Songz who has a crazy baby momma played by Tia Mowry-Hardict, an attorney-turned-councilman played by Taye Diggs and a multimillionaire who is 20 years older than her, played by Djimon Honsou.

One of these guys are potentially her husband, but which one? "Baggage Claim" will be out on September 27 in the States. No word on if it's coming to Europe, but I'd love to see the film.

Watch the hilarious trailer below - which also includes Terrence J, LaLa Anthony, Adam Brody, Affion Crockett and so much more.