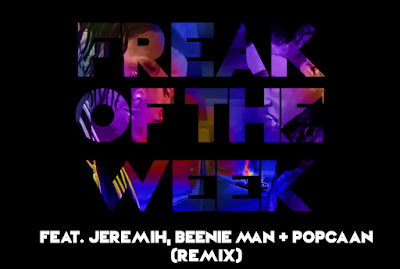 If you thought the original was hot... Wait until you hear the remix...

‘Freak of The Week’ is doing exactly what Krept & Konan expected for it to do, be the sound of the summer! And have all the girls go crazy for it in the club.

The single, out June 28th, has been all over the airwaves for the past month with Radio 1 picking it up for their a-list and the video already reaching over 4m views on YouTube, has now got a remix to it featuring Jamaica's Dancehall heavyweight Beenie Man and Bashment crooner Popcaan.

It comes as no surprise to many Beenie Man's feature on the remix, as the original sounded a lot similar to his 1997 reggae hit single ‘Who Am I (Sim Simma)’.

Along with the new remix, the band also announced their signing to American hip hop goliaths Def Jam Records ahead of the release of their hotly anticipated debut album ‘The Long Way Home’ out July 5th.

Krept and Konan will be playing the Glastonbury Sonic Stage this Sunday 28th June, as well as Wireless Festival next Friday 3rd July. Pre-order ‘Freak of The Week’ on iTunes: http://po.st/FOTWitYT and their new album ‘The Long Way Home’ (iTunes/Google Play/Signed CD)

Coming in perfect time for the weekend, it's the remix! Press play below.