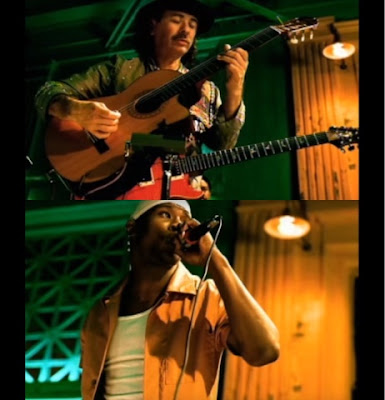 The legend Bob Marley once said “one good thing about music, when it hits you, you feel no pain.” And that's exact feeling that happens to me whenever I hear the sounds of Carlos Santana's guitar and the song ‘Maria Maria’.

The feel good classic is an immediate mood lifter and features The Product G&B. The R&B duo stepped on the scene in 1998 and are associated acts of Wyclef Jean's The Refugee Camp.

Marvin Moore and Sincere Gubano make up The Product G&B and have lent their vocals to numerous tracks and have aided the success of several singles and albums. ‘Maria Maria’ being a prime example.

‘Maria Maria’ is without a doubt one of my all time favourite songs. If it's not my favourite, it's definitely in my top 5. It was only right that I put the spotlight on ‘Maria Maria’ for this weeks ‘#ThrowbackThursday’.

Initially I didn't think to post a TBT for the blog, but I had heard this song over the weekend and it instantly reminded me of my childhood. In that very moment I remembered when and where I was when I first heard it. And wanted to share with everyone a classic that we once loved, or still may love, and have forgotten about ‘Maria Maria’, with this ‘#throwbackthursday’ post.

Guitarist Carlos Santana is part of the American Latin rock band ‘Santana’. Together they have earned a total of 36 awards including eight Grammy awards, three Latin Grammy awards, a Billboard Century award and were inducted into the Rock and Roll Hall of Fame.

Whilst Carlos Santana has gone on to receive a star on the Hollywood Walk of Fame and Grammy awards as a solo artist; among many other awards.

‘Maria Maria’ is certified platinum in the US and spent 10 weeks on the Billboard Hot 100 chart, from April 2000 to June of the same year, before being succeeded by Aaliyah's ‘Try Again’.

The song was produced by Wyclef Jean and Jerry Wonder, and was awarded for ‘Best Pop Performance by a Duo or Group with Vocals’ at the 42nd annual Grammy awards in 2000; beating out Backstreet Boys and TLC.

Well, what are they currently up to?!

At present Carlos Santana is on tour together with the Santana band, and they plan on releasing their twenty-third studio album ‘Santana IV’ on April 15th, 2016. The album reunites the original 1970's Santana lineup of Carlos Santana, Gregg Rolie, Neal Schnon, Mike Carabello and Michael Shrieve and marks the first time in 45 years - since 1971's multi-platinum classic ‘Santana III’ - that the quintet has recorded together. As for The Product G&B? Well they are in the studio working on new music with producer and affiliate Jerry Wonder.

Oh the joy if the groups were to reunite to perform this live, or even release new music together.

Reminisce back to 1999 with this one! Press play below and enjoy the sounds of Santana, Carlos Santana's famous guitar strings and The Product G&B!