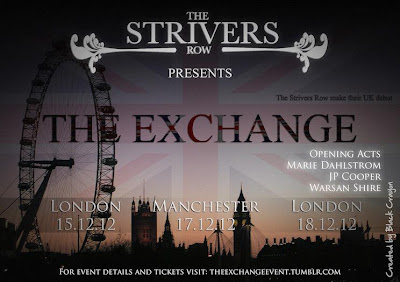 Last week I found myself on one of my favourite YouTube channels: TEDTalks. I watched some Spoken Word and Poetry videos, long story short - I tweeted and asked if there were any Spoken Word/Poetry events happening in London anytime soon and I GOT A REPLY!!!! (Read below!)

The Strivers Row Presents:
‘The Exchange’

After selling out shows all over the US - The Strivers Row are proud to present 'The Exchange', their 1st ever UK showcase! From BET to Russell Simmons' 'Brave New Voices' raving on about The Strivers Row - we in the UK finally get to experience first-hand what it's all about.

It's one thing to be able to perform on a platform created by someone else, and another to be able to create the platforms on which you stand. Tyler Perry, Oprah Winfrey and a few other folks have figured this out, which is why they have more money than nearly every black performer on the planet. The Strivers Row is learning this recipe for itself.” - HuffPost Blackvoices


For 3 nights only - Jasmine Mans, Joshua Bennett, Zora Howard, Alysia Harris, Carvens Lissaint and Miles Hodges will all be gracing the stage at 3 different UK venues - across London and Manchester!

Also performing on the nights Warsan Shire and Marie Dahlstom and JP Cooper with hosting from GREEdS.

The Strivers Row is an award winning collective of extremely passionate, incredibly talented and accomplished poets, writers, Dramatists and performers.

With heavy weight features at or on, are you ready for the it, Def Poetry Jam, Brave New Voices, The Apollo, The Sundance Film Festival, The Kennedy Centre, on and off Broadway, The Smithsonian and even THE White House, The Row (as they are affectionately known) have shared the stage with such greats as Saul Williams, Dr Cornel West and Amiri Baraka all whilst studying at some of the most prestigious universities that America has to offer.

Sounds like a night not to be missed right? That's why I am NOT missing it!!!

The Strivers Row gets great reviews from a lot of big names such as HuffPost - Blackvoices and the Daily Nebraskan.

"... the Strivers Row crew showed why they’re some of the best in the world. The flows were discernibly different and the poems thrived on the intellectual view- points of the artists. No surprise if you take a quick look at their bios and see phrases such as “Yale grad student.” Perhaps more impressive, though, was that the poems were full-bodied and complex, transcending the simplicity of “don’t be racist” and “don’t demean women.” - Daily Nebraskan