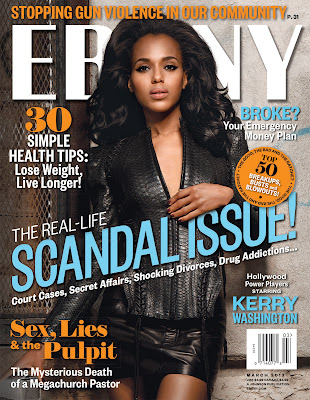 It only makes sense that Ebony Magazine put the queen of Scandal, Kerry Washington on the cover to their Scandal March issue.

Kerry Washington has been getting a lot of press since the Shonda Rimes hit TV show Scandal aired where Kerry plays Olivia Pope, as well as playing Broomhilda in the #1 box office, Quentin Tarantino movie Django Unchained.

This magazine issue talks on different 'scandals' that has happened in the Black community in America, including the mysterious death of a Megachurch Pastor - Zachery Tims who owned a church in Florida that passed away in a hotel room in New York.

Read some highlights of the magazine issue, which is already out on newsstands:
[Kerry] On the connection between Olivia and Broomhilda:
[Olivia] is the answer to Broomhilda’s prayers…I’m grateful that these two women on opposite ends of history, on opposite ends of their experience, both strong women but in such different ways, can exist at the same time.

[Kerry] On what she loves about Olivia Pope:
In her professional life, she is so powerful and is this self-made woman…But in [Olivia’s] personal life, she is a mess and I kind of love that…I love that I get to embody all of that complexity because I also think it takes a certain level of progress for us to have a Black Woman that powerful be an emotional mess on television.