Ciara has been allover her Instagram page making sure that we know her debut album is coming out THIS year! Over the last couple of days Ciara has been uploading lyrics and pics of the tracklisting to her new album, but the Goodies singer never released the album artwork and here it is (above). The cover came out on the UK iTunes chart over the weekend and sparked a lot of conversation about the album title.

Ciara will simply name her album 'Ciara' leaving 'One Woman Army' out in the dust - which is actually devastating because I loved that name. But I guess that's what happens when you're not exactly a "one woman army". Ciara has also changed the album release date from June 4 to July 9. (-___-)

Either way, let's just hope it's worth the worth - Body Party is a jam as it is. The video to that will be out next week! Ciara doesn't have much features but three - Nicki Minaj, her boyfriend - Future and Herself, so is that two? I don't even know. 'Sorry' and 'Got Me Good' will not appear on the album though. Check out the tracklist to 'Ciara' below. 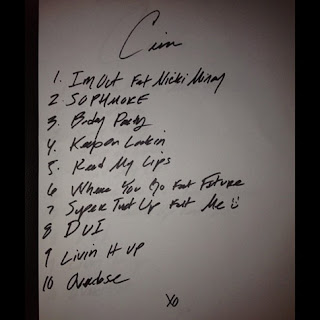