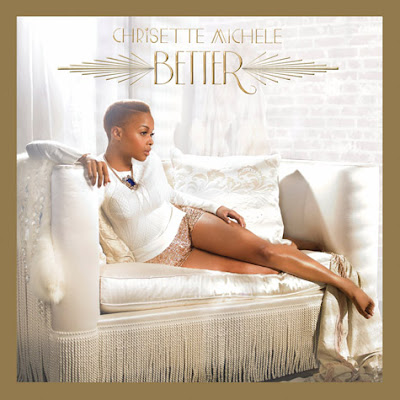 'A Couple of Forevers' is probably my favourite song out right now, Chrisette Michele did a phenomenal job on it.

In December Chrisette Michele dropped her mixtape 'Audrey Hepburn: An Audiovisual Presentation' - which featured 2 Chainz, Wale, Guitar Slayer and so much more. Now the Grammy award winning soul singer is to release her album 'Better' on June 11.

Photographed above wearing all white with a touch of gold on her flawless brown skin, Chrisette Michele poses for the cover of her album to 'Better'. The album will feature a handful of songs from her mixtape as well as 'A Couple of Forevers' and some brand new songs on the 16-track-album.

Michele just wrapped up touring with Keyshia Cole on Keyshia's "Woman to Woman" tour, hopefully there will be a world tour for the 'Better' album.

Chrisette Michele: 'Better' Album Tracklist
Be in Love
A Couple of Forevers
Let Me Win
Rich Hipster ft. Wale
Love Won't Leave Me Out
Interlude (In My Head Better)
Better
Snow
Visual Love
Charades ft. 2 Chainz
Interlude (In My Heart Convo With Boyfriend)
You Mean That Much to Me
Supa
Interlude (In My Bed Sleeping Alone)
Get Through the Night
Can the Cool Be Loved ft. Bilal & Dunson