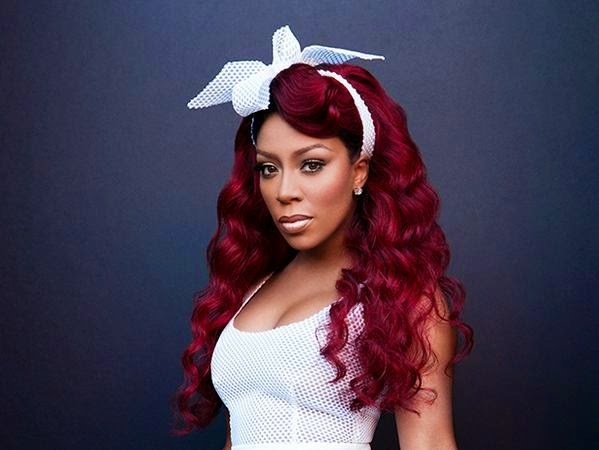 K. Michelle Monday is in full tact today, earlier on the clap back queen revealed her album title and tracklisting for her new album ‘Anybody Wanna Buy A Heart?’ and will later on debut her new reality show on VH1 ‘K. Michelle: My Life’, before premiering the new video to her single ‘Love 'Em All’.

And of course, it's only right for me to live off that momentum by sharing with you all my exclusive interview with K. Michelle, when she came to London late last month. Despite being a little under the weather K. Michelle still done the interview like the trooper that she is. Rather than most, I decided to focus her interview on her music, her as a mother and her new reality show, rather than her "beef" with artists, and athletes baby mommas'.

Answering the questions to the best of her ability - read my exclusive interview with the talented K. Michelle!

I’m good thank you, how are you?
A little under the weather, but I’m fine.

Yes, I heard. I hope you get well soon.
Thank you, I will.

During your time on ‘Love & Hip Hop Atlanta’, do you like the person the show portrayed you to be?
That was a point in my life, where I can’t say anything, but yeah that was me.

Your previous album title was called ‘Pain Medicine’, why did you decide to change the name to ‘Rebellious Soul?’
Because that was a whole another place, like me; every day I grow and especially as an artist, I sing, I make up so many songs in a day, and that period was ‘Pain Medicine’ and I felt like ‘Rebellious Soul’, the album was really aggressive and that’s how I was feeling and now you have this album, so you know with change you have to change so that’s why I changed the album title.

Your new single ‘Love 'Em All’ is my song, and can you tell your record label to release it in the UK by the way?
They're about to start working on it over here in the UK, and it should be released in about January. But I didn't want them to wait, but they said they wanted to wait and release it in January. So you guys will get it, and will get an album over here.

You take on a different sound with ‘Love 'Em All’, it’s more like a pop/rock ballad. Could we expect more songs like that on the album?
Absolutely, majority of the songs are like that. It’s just a bigger sound for me but it’s still me though,  it's still the topics I'm known for. I didn't go into the studio with any barriers or any genre restrictions over me, I just said let me make music and then you gotta take it from there.

You have a new song coming out, which is a country song with a country artist. What was it like recording that song and working with a country artist?
We’re still dealing with that right now, but recording the song, it was natural to me. I've got a music scholarship for A&M, I've always loved country. So it was nothing forced it’s what I listen to, what I've always been doing. It was just another song, and you know, the songs’ powerful and the meaning behind it. It was a great feeling to hear the finished project of the record.

We know you have a new reality show coming out next month; do we get to see what you’re like as a mother as we've never seen that side of you before?
You get to see somewhat, yes. I still keep him private, I felt like I needed to introduce him when he was ready and he was ready, and you get to see him a little bit but I still keep him sheltered and I’ll always do that when it comes to him being on TV.

What do you want to achieve in your music career?
I just wanna make music and want everybody to hear it. I want every race, every city, country, everybody to hear what I have to say and what I’m singing about and I want them not to judge me because of my past or the colour of my skin but by the actual music, that’s what I want for my career.

Do you have plans to tour the UK anytime soon?
Yes, next year. I'm definitely gonna be here.

When can fans expect your new album?
In December in the US. And I don’t have a month yet for the release here.
Posted by Mobolaji
Email ThisBlogThis!Share to TwitterShare to FacebookShare to Pinterest
Labels: It's Just Mobolaji Interviews, K Michelle, UK