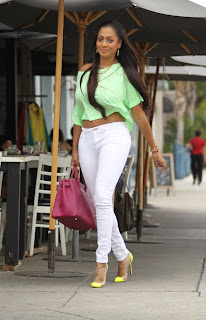 La La who showed me some love on Twitter this past week was spotted in Hollywood filming the third season of her reality show. "La La's Full Court Life" has been doing extremely well and seems to me that the ratings have been going up every episode. Congrats to ma gurl La La for that. And also a BIG congrats to La La for her new role in the movie 'Baggage Claim' as a main character, with other big names such as Paula Patton & Derek Luke. La La features in this new rom-com by David E Talbert and begins filming soon. More info on that on It's Just Mobolaji real soon! 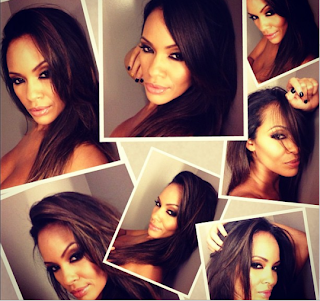 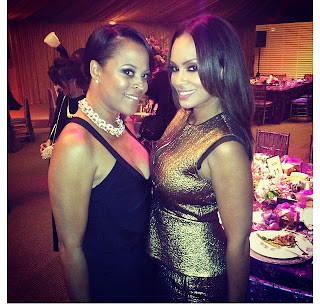 Evelyn Lozada has moved on quite quickly from the domestic violence incident she was involved in with husband, Chad Ochocinco/Johnson. Ev goes for a darker look with this dark chocolate new hair colour! And I love it, she uploaded the pic via her instagram and has been getting great reviews from it already! Evelyn was also spotted out with her homegirl and fellow Basketball Wives cast member - Shaunie O'Neal  at an event in LA.
(P.S. I recently got Evelyn Lozada's book "Inner Circle" and so far so good!!!!!). 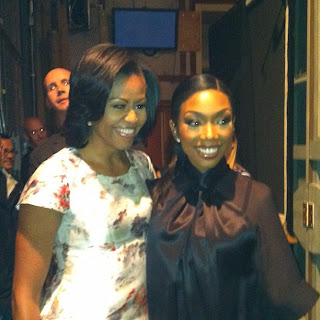 Brandy and FLOTUS - Michelle Obama are glowing in this picture. Two powerful black women kicking it, I couldn't be happier. 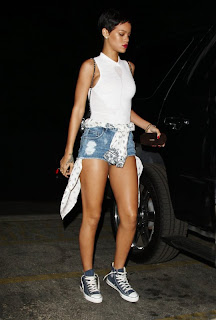 Rihanna's swag is insane!!!! And she looks like she doesn't even try too hard. I love every single bit of this outfit; this short pixie cut is werking for her. Rihanna has been going hard in the studio recently for her 7th album "Unapologetic". 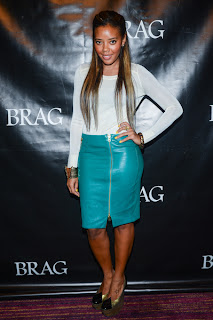 25 and fabulous and everything else is exactly what Angela Simmons is. Out at the BRAG (Black Retail Action Group) Gala in New York City, Angela is wearing a blue leather skirt that does a lot for her figure. Please note that Angela Simmons is a vegan. Yes, she doesn't eat meat. Well, let me try that and see if I get a body like Angela's! 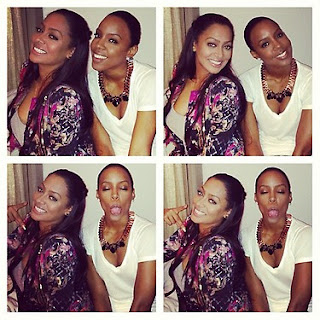 Best Friends La La Anthony and Kelly Rowland took a pic of themselves just hanging out together in Los Angeles. La La put up the picture of the two via her instagram with a caption that read '
True friendships are the key to life..me & @kellyrowland... #forever'.
I couldn't agree more! 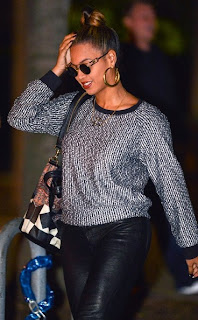 On the other hand, Beyonce was wining and dining with hubby Jay Z in New York City on Sunday, rocking them Isabel Marant sneaks! I see you Bey! 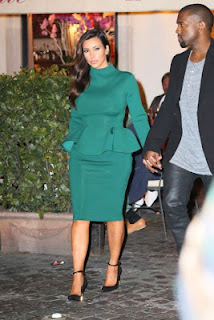 Love is in the air!! Kim Kardashian who is currently out in Rome celebrating her 32nd birthday with boyfriend Kanye West, is rocking that peplum dress. Kim has been seen in peplum, leather skirts, strap on heels and other things a lot recently, she has "minimized" her wardrobe collection by the looks of things. She still looks stunning. Happy Birthday Kim Kardashian! 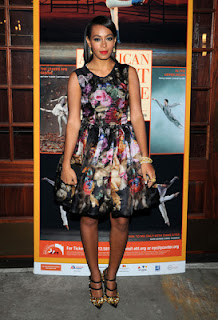 Solange's hair is LAID!! Rocking D&G from head to toe, Solange stepped out with a more different look - flat ironed hair. Even though I love Solange with her natural fro, I also like this sophisticated look on her. Yes gurl! 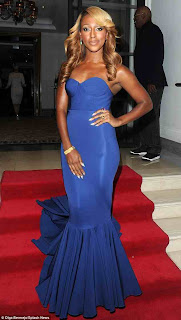 Talk about GLOWING! Alexandra Burke is looking beautiful. The singer stepped out at the Shining Star event in London with actor Samuel L. Jackson over the past weekend. Mm, Alexandra Burke put some stank on that dress. Killin' it! 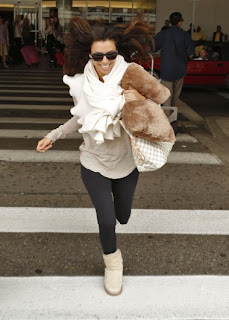 Even on the run Eva Longoria is looking fierce. Holding a pillow and her Louis Vuitton bag in Los Angeles airport, LAX - I don't know if Eva is running to catch a flight or running out of the airport. Either way, she looks good!!

From the Hills Heidi Montag - she was one of my favourites on that show. The human barbie doll reportedly went broke after splashing "millions" on useless things. (*sigh Heidi). BUT she is looking good, as she hosted an event at a strip club in Vegas. Get that money gurl, you'll be needing every penny of it!
Your breasts are looking great Heidi! 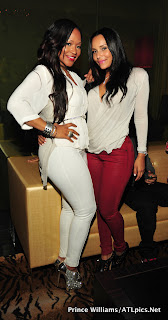 Last but not least, Girlfriends of both Ne-Yo and Ludacris were out at Ne-Yo's birthday at the Hawks game in Atlanta and at Vanquish. (L-R): Monyetta Shaw (Ne-Yo's girlfriend/baby moms) and Eudoxie (Ludacris girlfriend). Even though I'm still yet to find out what they actually do, the ladies are looking lavish, living that fab life!
Posted by Mobolaji
Email ThisBlogThis!Share to TwitterShare to FacebookShare to Pinterest
Labels: Alexandra Burke, Angela Simmons, Beyoncé, Brandy, Eva Longoria, Evelyn Lozada, Flicks, Heidi Montag, HOT Girls, Kelly Rowland, Kim Kardashian, LaLa Vasquez Anthony, Michelle Obama, Rihanna, Roc Nation, Solange Knowles