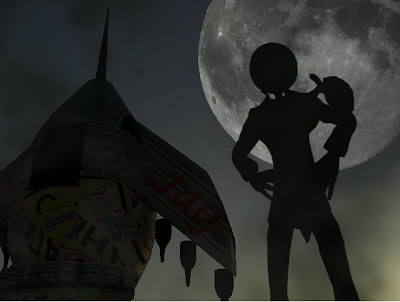 The cine-grime artist who has earned the name 'the Lemony Snicket of rap' turned a lot of heads when he released part 1 of The Space Tourist 'Mr Jay Jay', who he introduced us to.

Mr Jay Jay, an isolated and elderly man who wishes to fly into space powered only by his dreams.
And now in the second part joins Mr Jay Jay’s just as he finally realises his life ambition, escaping to the sky and shocking the world beneath him with it.

Lex who is 27-years-old has been backed by German pianist and composer - Hauschka once again for The Space Tourist. Jones' narrative tests the traditional conventions of grime and hip-hop in a way like none before him. Keep a close eye on him as we see just how far he can go with his genuinely unique listening experience.

The final two parts of 'The Space Tourist' and one of his long-awaited projects 'The Moirae' will be released later on the year - coming sooner than you think actually!

His unique style and creativity is one to watch in this new year of 2013 so don't take your eyes off Lex Jones' and follow his journey which will hopefully elevate him to a level of attention not unlike that of Mr Jay Jay's  in his new video.