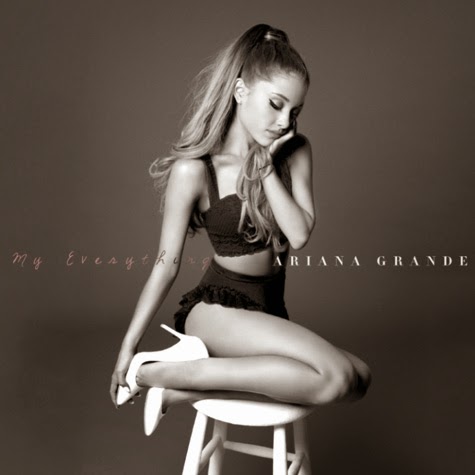 It hasn't even been a year since Ariana Grande released her debut album ‘Yours Truly’, and now the ‘Right There’ singer has revealed the official album artwork and tracklisting to her sophomore release ‘My Everything’.

‘My Everything’ is set for its release on August 25th, five days earlier than her 2013 debut ‘Yours Truly’ and features the likes of Iggy Azalea, Zedd, Big Sean (who she has previously worked with on ‘Right There’), Cashmere Cat, Childish Gambino, The Weeknd and A$AP Ferg.

Pictured above is a sweet and innocent Ariana Grande on the official album cover of ‘My Everything’, and below is the official tracklisting.

‘My Everything’ will be out in stores on August 25 and features production from Rodney Jenkins, Harmony Samuels, Nile Rogers, Max Martin and so much more.
Posted by Mobolaji
Email ThisBlogThis!Share to TwitterShare to FacebookShare to Pinterest
Labels: Album Covers, Ariana Grande, New Album, Tracklist