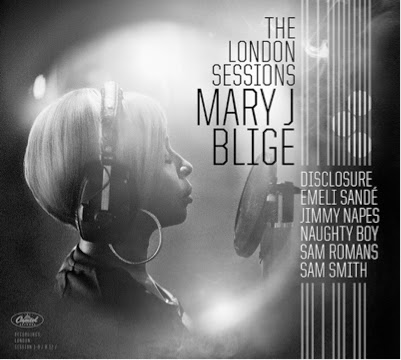 Dubbed as the Queen of "Hip Hop Soul" Mary J. Blige has taken her talents across the pond to for her new album ‘The London Sessions’, and has now revealed the album cover and release date.

Having spent the whole summer in London recording the album with the likes of Naughty Boy, Emeli Sandé, Sam Smith, Disclosure, Eg White, Jimmy Napes and SAM ROMANS, ‘The London Sessions’ will arrive in UK stores - November 24 and in US stores - December 2.

Blige is set to release the first single off the album titled ‘Therapy’ which was helped penned by Sam Smith on September 23. Speaking on her new project Mary J. Blige said "it's all about the London music scene and I'm so excited to have been part of it, to record my album. The songs are fun, therapeutic, and soulful. This is beautiful change for me and I'm proud of what we have done here."

‘The London Sessions’ is her first LP since her 2011 release ‘My Life II: The Journey Continues’ and will perform some of the songs from the new album at the iTunes Festival in London on September 25.

Capitol Music Group chairman Steve Barnett also spoke on the album stating: "Mary J. Blige created a one-of-a-kind blend of hip-hop and soul that has excited fans for more than 20 years, making her one of the most successful and acclaimed artists in any genre of music. The London Sessions is a fantastic album; another step forward for this great and enduring artist."

Well, the chairman has spoken and we're more than excited to see what MJB comes up with on this new album. Watch the trailer to ‘The London Sessions’ below.