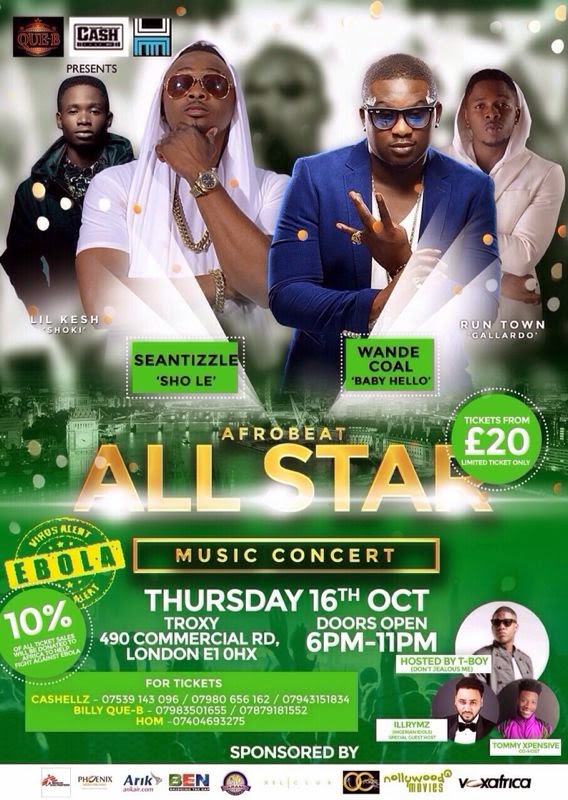 The Black Diamond of Africa - Wande Coal, is set to headline the Afrobeats Allstar Music Concert, this October at London's Troxy.

The night will also showcase UK talent including Sona, Ezi Emela (the only female on the lineup) and YFS and will be hosted by actor/comedian - T-boy ‘Don't Jealous Me’ and co-hosted by Tommy Xpensive, with special guest host - Illrymz (Nigerian Idol host); who will all come together to make the night a memorable one.

And to keep the buzz going I'll be giving away a pair of VIP tickets to ONE lucky reader on this blog and all you have to do is simply answer this question below!

COMPETITION DETAILS
Follow me on twitter @Mobolaji_ if you're not doing so already! Email itsjustmobolaji@gmail.com with the answer to the competition question and the subject title being 'Afrobeats Allstar Music Concert', with your full name and contact number. Competition ends on Thursday 9th October, 2014 and the winners will be contacted and announced on Friday, 10th October 2014 - exactly a week before the show! *THIS COMPETITION ONLY APPLIES TO UK RESIDENTS ONLY*

Full event details are as followed

Best of luck to everyone who enters the competition and if you're unlucky, there'll be more comps up on itsjustmobolaji in the future!