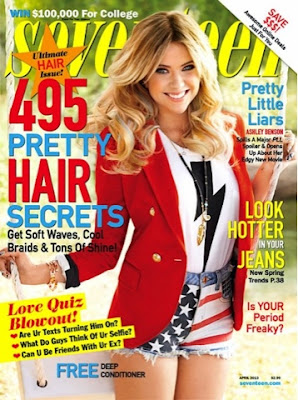 Wearing the patriotic colours of the United States on the cover of Seventeen magazine, the beautiful Ashley Benson of 'Pretty Little Liars' keeps it all the way real and she seems like a cool girl to kick it with.

The 23-year-old who plays 'Hanna' in 'Pretty Little Liars,' sat down with Seventeen magazine to discuss her career goals, Justin Bieber, and the movie she done with Vanessa Hudgens and Selena Gomez. Read what she the actress had to say below..

On her career goals:
"I love Michelle Williams and Natalie Portman-those are the careers I want. My goal is to win an Oscar, and I'm going to take the steps to get there."

On how 'Spring Breakers' changed her and co-stars Vanessa Hudges and Selena Gomez:
"We all came from a Disney background, and this was different from anything we've done. But we wanted to prove that we're not just girls who play happy parts. It was such a crazy experience and it was character-building. I'm so proud of all of us. I'm really, really excited for everybody to see it."

On Selena and ex Justin Bieber's response to the parody "Boyfriend" video from James Flanco and herself:
"I haven't heard from Selena! People that I was being mean, but I was just doing what the girl did in the video. It wasn't a jab at her. But I heard from Justin. He wasn't happy. Justin is like my little brother since he and my ex asre so close. Anytime you go through a breakup, the friends get defensive. But all is well in that are now."

Seventeen Magazine
Whilst Ashley Benson covers 'Seventeen' magazine, her co-star Shay Mitchell covers 'Teen Vogue.' Check her out as she speaks on 'standing out in Hollywood' inside!!>>>>> 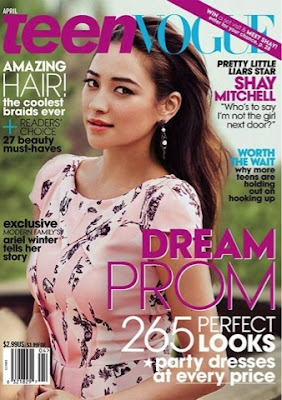 Shay Mitchell - beautiful on and off the TV screen, covers Teen Vogue in this soft pink Topshop dress. The 25-year-old plays Emily in the hit TV show 'Pretty Little Liars,' a lesbian on the swim team. Mitchell addresses gay rumours, talks about playing a gay character and gives out advice to young girls. She answers every question so maturely, read below and check out the rest of her spread for 'Teen Vogue'. 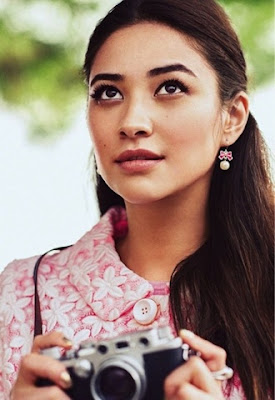 On the gay rumours:
"People always ask me, 'Are you gay like your character?' But I don't feel like I need to answer, because honestly, it doesn't matter. And it means so much to me when someone says, 'Thank you for playing this role.' It's one thing to entertain people, but it's something else to actually have a small impact on their life in a positive way, and that's why it's important for me to meet my fans. Whenever there's a meet and greet, whenever I can do a signing, I love that." 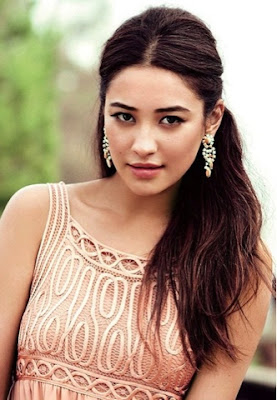 On playing a gay character:
"The casting directors told me Emily was gay and asked if I was cool with that, but I didn't think twice. I have a lot of friends who are gay; my aunt had a girlfriend. It's just normal. And the way that fans have reacted [to my portrayal of Emily] has been amazing: I'm not playing the gothic chick dressed in all black who eats lunch in the corner and is a lesbian. If you look at the poster, you wouldn't necessarily be able to pinpoint which one of us is the lesbian, and that was really important to me." 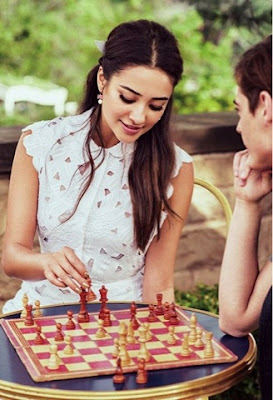 On her advice to young girls:
"I'd say embrace what you were born with. I grew up in predominatly Caucasian community, and most of my friends had blonde hair and blue eyes. So I was always straightening my hair, wearing colored contacts, and I never tanned, if I could help it. Now that I'm older, I realize that the things that made me different are the things that make me special. And when a girl comes up to me and says, 'You're so pretty. I want to look like you,' I say, 'No, you don't. You want to look like you, because you're unique and you're beautiful.' I have no problem telling anyone that I wear false eyelashes when I'm filming, and we've always got makeup on, even in the scenes where we just woke up, and we have lighting guys who are making sure we don't have double chins. We all have our things, but I embrace them, because I know nobody's perfect."

Beautiful little speech from Shay Mitchell... Ladies embrace who you are, your looks and everything else that makes you unique!