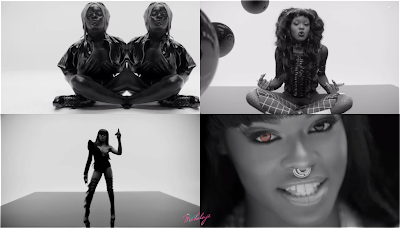 Just one week since the unexpected release of her critically acclaimed debut album ‘Broke With Expensive Taste’, Azealia Banks has premiered the official music video for her current single ‘Chasing Time’.

The creativity of the black and white visuals has Azealia Banks name written all over it, the 23-year-old pays homage to two of hip-hops greats Lil Kim and Lisa "Left Eye" Lopes in the video, where she visually recreates some of their greatest moments. Banks even recreates Lady Gaga's ‘Artpop’ album cover in the video (see the photo comparison below, thanks to one amazing person on Tumblr). 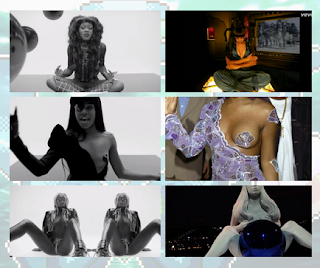 The stunning new video, directed by Marc Klasfled, made its worldwide premiere yesterday via MTV and is off Azealia's chart-topping debut album, which peaked at #6 on the UK iTunes album charts, and #1 in the UK iTunes alternative charts, and reached #1 on the U.S iTunes hip hop chart. Winning!

The video to ‘Chasing Time’ is all sorts of amazing, and shows us Azealia's more than just a rapper - but a visual creator and dancer. I just love this video and song, isn't she amazing? Watch below.