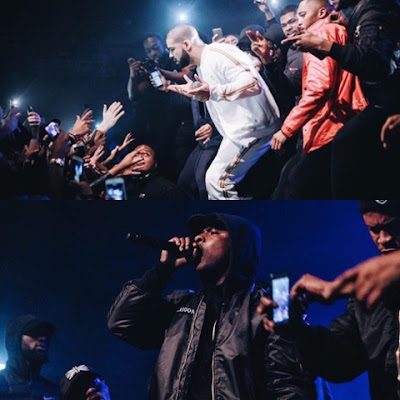 I trust the people at Link Up TV to always come through with footage on time. They stay on top of their game! *inserts muscle emoji*

This evening Drake hit the stage at the O2 Arena in London for the BRIT Awards to perform ‘Work’ with long time collaborator, Rihanna. He then quickly headed over to Village Underground in Shoreditch along with Skepta to surprise fans at Section Boyz sold out headline show.

Drake has previously expressed his love for the UK rap/grime scene and has co-signed the likes of Skepta and Sneakbo to mention, and is even a fan of the hit TV show ‘Top Boy’.

Drake has shown support to Section Boyz by posting a photo of their EP cover ‘Don't Panic’, and telling his followers to purchase the project via his Instagram account last year. As well as captioning his photos with their song lyrics. So it comes as no surprise that he made a guest appearance at their concert tonight.

The news quickly spread on social media that the rappers had made a guest appearance as fans took to Snapchat, Twitter and Instagram to post videos, photos and tweets. Section Boyz were even trending on Twitter! Gotta love social media!

Skepta performed his hit ‘Shutdown’, before Drake made his intro onto the stage with his song ‘Jumpman’ playing, and that alone had me in a frenzy and I wasn't even there. Imagine the reactions of those that were physically in attendance. #CRAZY!

In another video posted online Drake is seen rapping along to Section Boyz songs word for word whilst being on stage with them.

Drake is actually fucking with Section Boyz he knows the words omds pic.twitter.com/7nKydTB9tE
— A'£ (@AbdiTV) February 25, 2016

Section Boyz are currently on their ‘SECTIONED’ UK tour, and will stop at Bristol and Brighton in the coming days.

What a way to rep in their home town! And what a time to be alive. Check on it below... in the words of Section Boyz can we say “Lock Arf?”