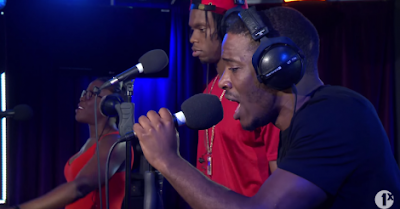 It's not easy to cover a classic hit single, and win people over with your own version. But London rap duo Krept & Konan did just that.

Earlier today, Krept & Konan hit up BBC Radio 1Xtra for their live lounge performance. The duo performed their brand new single ‘Freak of The Week’ (currently at #4 in the official midweek chart), as well as a cover of The Notorious B.I.G's ‘Mo Money Mo Problems’ featuring Puffy & Mase, that left people excited for their debut project.

Sounding amazing on the vocals is singer ShezAr who joined Krept & Konan to perform ‘Mo Money Mo Problems’ as she sang the catchy hook with her own spin to it. The real MVP of this cover though, is Krept who delivered with a Biggie flow in his verse and killed it.

Their debut LP ‘The Long Way Home’ is out on Sunday, 5th July and features guest appearances from Rick Ross, Emeli Sandé, Ed Sheeran, YG, Wiz Khalifa, Skepta, Rebecca Garton and Jeremih who features on their ‘Freak of The Week’ single, out now.

Last week, Krept & Konan unveiled one of the many remixes to ‘Freak of The Week’ featuring Bashment/Dancehall king Beenie Man and crooner Popcaan; listen here.

Krept & Konan will be playing the Pepsi Max Arena stage this Friday 3rd July at Wireless Festival. Order ‘Freak of The Week’ on iTunes: http://po.st/FOTWitYT and their new album ‘The Long Way Home’ (iTunes/Google Play/Signed CD) out Sunday, 5th July.

Watch as Krept & Konan bring the fire in the the 1Xtra Live Lounge below!

Also, on Monday the boys released their documentary entitled ‘The Long Way Home’, capturing their journey from when they first started up until the release of their debut album; this can be seen when you click "read more" below. Watch and check out their story. Be inspired.